A Palace of Wonders 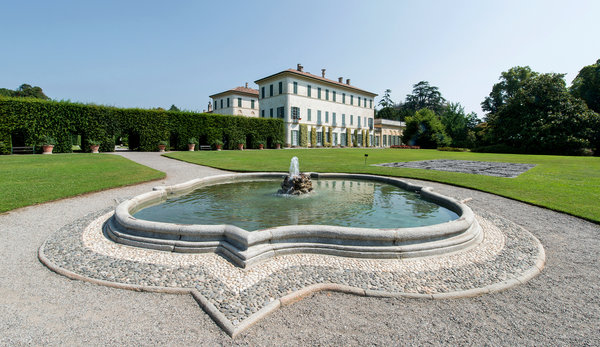 VARESE, Italy — The Lombardy region of northern Italy is known for its many “villas of delight” — the “ville di delizia” that aristocratic Milanese families built in the 17th and 18th centuries as summer escapes and settings for lavish entertainments. Varese, in the foothills of the Alps, was a magnet for these estates, several of which are clustered on the parklike hill of Biumo Superiore. At its crest sits the Villa Menafoglio Litta Panza, the most storied, thanks to its longtime owner, Giuseppe Panza di Biumo, the Milanese businessman whose adventurous tastes and ardent appetites made him one of the most important art collectors of the last century.

“It’s not bad,” admitted his daughter, Maria Giuseppina Panza di Biumo, a smile escaping her lips as our eyes swept across eight acres of topiary and fountains.

In 1996, more than a decade before his death at 87, Count Panza, as he was widely known in the art world, donated the estate and 167 of the 2,500 artworks he’d amassed to the Fondo Ambiente Italiano, Italy’s national trust, which opened it four years later as a museum. Normally on view are sculptures by Martin Puryear and Meg Webster, monochromatic paintings by such artists as Phil Sims and David Simpson, and site-specific works by Dan Flavin, Robert Irwin and James Turrell that Panza commissioned in the ’70s. But through Nov. 2, the villa is also hosting a small but powerful exhibition of works by Mr. Irwin and Mr. Turrell, pioneers of Southern California’s Light and Space movement, artists whose concern with the limits of perception appealed to Panza both aesthetically and intellectually.

Called “Aisthesis: The Origin of Sensations,” the show takes its cue from the ancient Greek word for “feeling.” Esthesia, the ability to perceive, is the opposite of anesthesia, and this is what the exhibition is about: not admiring inanimate objects, but sensing afresh the world around us. Mr. Irwin and Mr. Turrell create a dialogue between illusion and reality that appealed to Panza — a somewhat stiff and cerebral figure — in ways that he himself may only gradually have appreciated.

Organized by Anna Bernardini, director of the Villa e Collezione Panza, and Michael Govan, director of the Los Angeles County Museum of Art, the exhibition comprises 19 works created from 1963 to 2013. Among them are two environments the artists returned to the villa to create last year: Mr. Irwin’s “Varese Scrim 2013,” translucent and serene, and Mr. Turrell’s “Sight Unseen,” an unsettlingly immersive installation that provokes a sense of wonder tinged with intimations of danger.

Occupying a former lemon house built in the early 19th century, “Varese Scrim 2013” consists of a mazelike series of white nylon panels that capture sunlight streaming in through tall, south-facing windows. It’s almost the inverse of the “Varese Scrim” he created for the villa 40 years earlier. That work, directly upstairs, transformed a windowless room by dividing it lengthwise with a white nylon panel that is all but indistinguishable from the walls. What appears to be a solid surface is in fact a screen that masks a void, creating a ghost room that exists in parallel with the room you can enter.

This understated questioning of the physical, so characteristic of his work, is present throughout the show. Two other works Mr. Irwin created in 1973, “Varese Window Room” and “Varese Portal Room,” use simple architectural elements to make subtle interventions in empty white rooms, adjusting our perception in a way that makes the real seem hyper-real. A tall acrylic column on the main floor of the villa refracts the sunlight streaming in, scattering rainbows across the room even as the column itself all but disappears.

The Turrells in the show are more assertive, sometimes to the point of aggression. “Shanta (Blue),” a 1967 piece never exhibited outside the artist’s studio, looks to be a glowing, three-dimensional blue box suspended in a corner of a darkened room; in fact, it’s completely immaterial, a projection of blue light. “Skyspace I,” one of the three works Mr. Turrell created for the villa in 1974, is a small room so saturated with natural and fluorescent light as to be blindingly white. 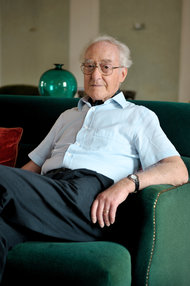 The first of more than 70 “skyspaces” Mr. Turrell has created, it prefigured “Aten Reign,” the otherworldly installation that occupied the rotunda of the Solomon R. Guggenheim Museum in New York during last summer’s Turrell retrospective. But where the Guggenheim installation was vast and awe inspiring, “Skyspace I” is intimate and assaultive. It’s also modest compared to Mr. Turrell’s new installation at the villa, “Sight Unseen.” One of his “ganzfeld” (“total field”) pieces, this is an immersive and wildly disorienting environment designed to produce confusion and astonishment in equal measure.

Visitors experience the work in small groups for 10 minutes at a time. After signing a release (lawsuits have been filed over injuries sustained in other ganzfelds) and donning plastic bootees, you are ushered up a set of steps to what looks like an extremely large artwork on the wall. The guide steps through it, inviting you to do the same. Entering a large and seemingly boundless space suffused in white, you feel as if you have floated into a cloud — or you would feel that way if the floor weren’t sloping downward reminding you that gravity has not gone on holiday.

There seems to be an edge ahead, barely visible but suggesting a sharp drop. Then the light begins to shift, from an all-encompassing white to intense reds and blues. Now you feel as if you were deep within a Rothko, bathed in nonspecific spirituality. It would be nice to have a wall to lean against, but you can’t make one out. It’s important to remain upright, you tell yourself. You still have five or six minutes to go.

James Turrell’s new immersive installation “Sight Unseen,” which produces the feeling of floating inside a cloud.

Giuseppe Panza di Biumo was the dutiful son of a Milanese wine merchant and real estate investor who had been granted a title by King Victor Emmanuel III. Young Giuseppe earned a law degree after World War II and went into the family business. But his first love was the villa, which his father had acquired in a run-down state in 1935. He fell in love with America on his initial visit to New York in 1954, and a few years after that, he discovered his greatest passion: art. Here in Varese, at the estate he once described as “a great, green space suspended between heaven and earth,” his three passions converged.

Panza — “He was never a count,” his daughter said, laughing, “but people liked to call him that” — focused his attention on American artists of the 1950s, ’60s and ’70s. He bought early and in depth, moving on to newer artists once the market caught up with his tastes. He installed many of the best pieces in the villa, to the befuddlement of friends and neighbors.

The white stucco mansion with its decorative plasterwork and 18th-century frescoes was not an obvious home for such work. Panza reveled not only in the juxtaposition but in all the space he had to fill.

“He started collecting because he had this house,” said Ms. Panza, who is a curator there, along with her son and three other family members. “He wanted big things, because he had big spaces.”

Panza first encountered Mr. Irwin’s work in the late ’60s. He was fascinated by Mr. Irwin’s concern with perception and reality: how we think we perceive reality when what we perceive is in fact what we think reality to be. No sooner had he begun to grapple with this conundrum than he discovered Mr. Irwin was not alone in this pursuit. “Irwin told him, ‘You have to go to L.A.,’ ” Ms. Panza said. “There’s a group of artists who are working with light. It’s very important.”

Chief among them was Mr. Turrell. Under the auspices of an early Los Angeles County Museum of Art program, Mr. Irwin and Mr. Turrell had worked with a psychologist on sensory-deprivation environments, a forerunner of Mr. Turrell’s ganzfelds. Before long the two artists found themselves in Varese, transforming rooms above the stable into the site-specific environments you find there today.

As for Panza, he succeeded in transforming the hilltop estate once again into a villa of delight, though one this time conforming to his own definition.

“My father was not very emotional,” Ms. Panza said as we walked back toward the first-floor family quarters, now open to the public as well. “He was more thoughtful.” 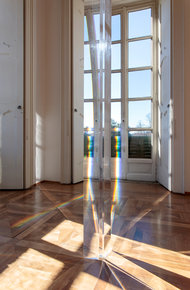 But the villa “was a place of recovery for him,” she explained. “It gave him breath and hope.”

Not always, however. In 1999, having concluded a series of deals that sent the bulk of his collection to the Guggenheim and the Museum of Contemporary Art in Los Angeles, he was overseeing a full restoration of the villa as both museums were preparing major Panza exhibitions. For an obsessive and a perfectionist, it was all a bit much. Perception may not be reality, but it’s the closest thing we know, and reality had to be just right. The stress led to a heart attack, and as he was recovering, he became overwhelmed with the realization of how much it all meant to him: the purchases, the intellectual discussions with artists, the art itself.

One day, he turned to his daughter, she recalled, and with surprise in his voice said, “I didn’t think emotions could influence so much our heart.”

Frank Rose is the author of “The Art of Immersion: How the Digital Generation Is Remaking Hollywood, Madison Avenue, and the Way We Tell Stories.”

CLICCCATE L'IMMAGINE PER INGRANDIRE / CLICK THE IMAGE TO ENLARGE